I'm sure we've all seen the gushing and fawning going on about Michelle Obama's fashion. If it seems a trifle forced, I believe that you are getting it.

The fashion writers have had an eight year pause in their coverage, and as much as they want it, they just can't quite re-create Camelot. Michelle is no Jackie, but it doesn't stop the press from trying to make her in Jackie's image. But the clear-eyed truth is that Michelle Obama is like most of the rest of us when it comes to fashion. Sometimes she gets it; but a lot of the time (black widow spider dress comes to mind) she misses by a mile.

Although the press raved about her inaugural garb, to me she looked like she'd been sprayed with a can of Redi-Whip. When she met Sarcosy's wife, she looked like she was wearing her granny's drapery. But the adoring press acted like the awestruck courtiers in the story, "The Emporer's New Clothes", wherein a tailor sold the silly monarch a suit of new clothes which were absolutely non-existent. The emporer believed the flattery, and the people enabled that belief by repeating it. It took one little child saying "but he's naked!" to bring the truth to light.
Posted by Judy Hudson at 7:14 AM 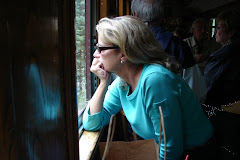